One afternoon when I was a teenager, I picked up my brother’s acoustic guitar, opened the ‘Beatles Complete’ songbook, and began learning ‘Let It Be’ because it only had four chords. It was the beginning of a lifelong love of playing guitar, as I worked my way up to ‘Yesterday’ with eleven chords … and a lifelong love of the Beatles music. 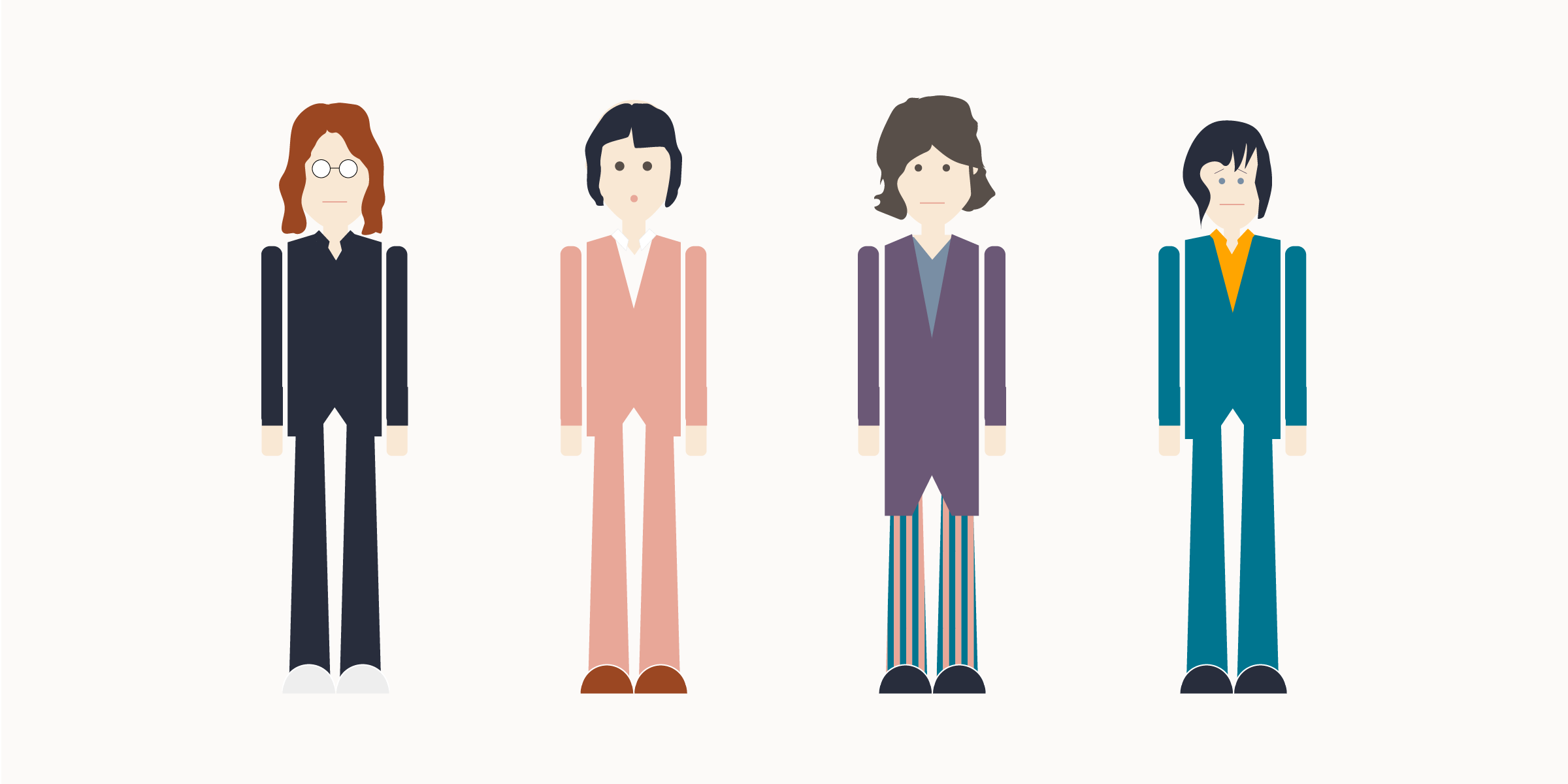 I’ve been continuing to dig into the changing psychology of artists through their lyrics using Watson Personality Insights and earlier this year worked on a Beatles project. As usual, I drew the Beatles in my own childish style using Adobe Illustrator, and ran personality insights on the band’s lyrics.

With the help of my work colleagues, Steve and Bogdan, both Beatles fans, we identified five eras of Beatles music styles. You can check the project out for yourself.

If you check the project out, you can see how we assigned the albums to these eras. 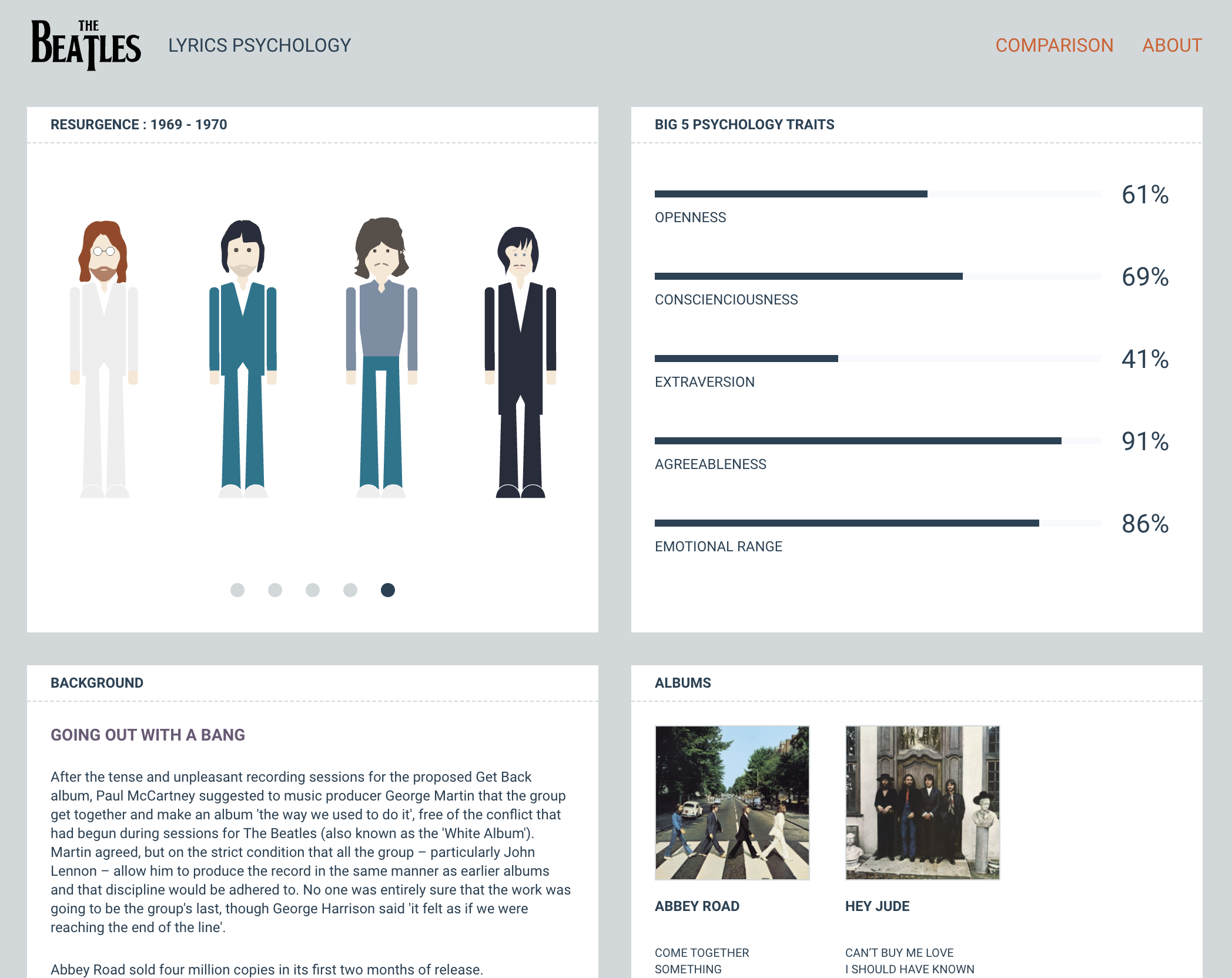 These are the eras we identified.

The Beatles music changes through fairly dramatic and well defined styles beginning with the poppiness of albums like ‘Help!’ and ending in the mastery and refinement of ‘Abbey Road’.

What do the changes of eras reveal?

Well, based on the big five personality traits the Beatles were remarkably consistent in their emotional range throughout their career.

Trust and authority challenging peaked with the Sgt Pepper era. Striving for achievement ( lyrically ) reached a peak with Abbey Road.

Lyrically, the ‘Back To Basics’ era was the least agreeable - matching the written history of the band during the recording of ‘The Beatles’ and ‘Let It Be’ albums.

So maybe not so many surprises lyrically. The Big Five Personality Traits indicate that the Beatles ended on a high note - with the most conscientious work ( lyrically, and the all around higest scoring ).

I really liked figuring out these eras, studying the results and drawing sketches of the band through the ages.

A few weeks ago, my teenage son Toby asked if I’d help him use my Natural Language Processing, David Bowie lyrics personality analysis techniques on the artist Mac Miller.

I really didn’t know anything about Mac Miller. I learned that he struggled with substance abuse, which was often referenced in his lyrics. On September 7, 2018, Miller died from an accidental drug overdose at his home, at the age of 26.

So, I set to work, building up the lyrics data with Toby. You can explore the project here.

I realized that it is tricky to reuse any of the previous work I’ve been doing with my lyrics analysis, and Toby showed me that I needed to find a better way of scaling the idea for others to use if they want to.

A new web component based project 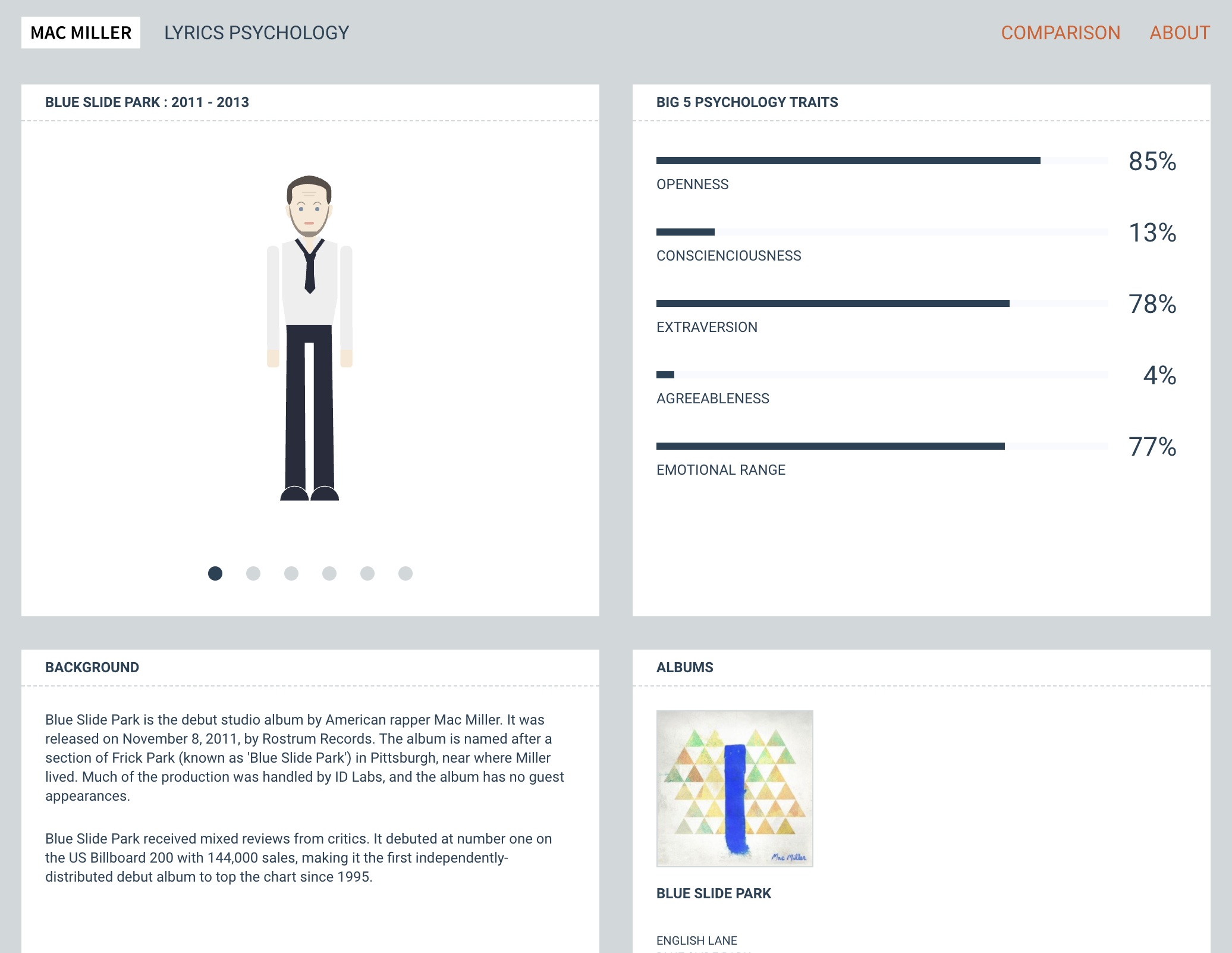 In the past when I’ve built these lyrics analysis for David Bowie, Coldplay, or Hamilton, I’ve worked to design a unique kind of web app for each. I’ve drawn sketches of the different eras of the artist’s careers, and then tried to design a storybook site around them.

I’ve realized that it doesn’t scale well, so during the past few months, I’ve been working on a standard, reusable way of presenting the data. It is still a work in progress, but there is now a evolving set of tools and web components to more quickly create new analysis. I’m going to write more about that on the IBM Developer Blog soon.

I’m really excited by the power of web components, expecially given how they are an open standard for modularizing web development. I’m also really excited to share some of the things that I’ve learned about using them, as well as my tools and library.

What did I learn about Mac?

I am no expert on Mac Miller, at all. To figure out his different eras, I relied on his Wikipedia entry. I took each of his six studio albums and then watched some videos of songs from them, to see how he looked visually.

I drew a sketch of him for each album using the Pantone Colors of Spring 2020 collection. Toby told me that Mac was 5’7” - so a little shorter than David Bowie and Chris Martin. I adjusted a bit.

What I noticed about his music is that it started out quite hard and heavy, but became more melodic and poppy as time sped on.

Lyrically he became progressively less open after his second album. In the last couple of albums he was also lyrically much more introverted.

The emotional range in the tracks had been growing since his third album ‘GO:OD AM’ - where he had supposedly begun leading a less dependant lifestyle.

Maybe Toby is looking for more clues by using this lyrics analysis. It is interesting for me too, to learn more about this artist, that even President Obama has been listening to (‘Blue World’ from ‘Circles’). I’m still listening and learning more. Toby says another posthumous album is in the works too.

Is It Or Isnt It

I am recovering from what I think was a Covid-19 infection. I had almost all of the symptoms of Covid 19, yet I tested negative for it, nine days after my first cough.

A couple of weeks ago, I started coughing. At first it was a tiny random cough, that I just dismissed. I can’t remember when I last had a cough. 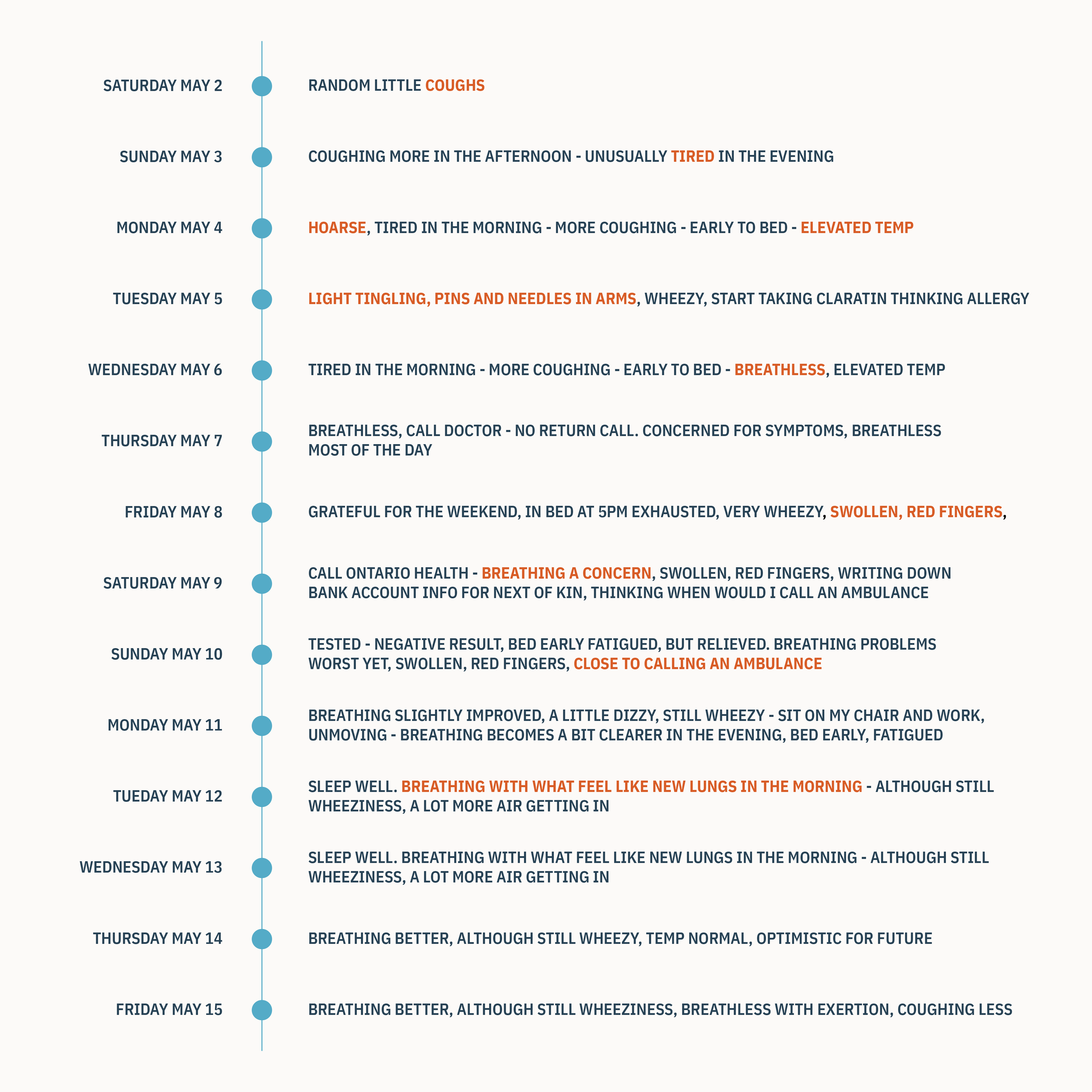 For most people, every cough or sneeze these days seems to come with a question mark, and every change in health a cause to ask if it is ‘the virus’. I haven’t asked that about myself until now … even during the first few days of what turned out to be a breathless few weeks, I was looking for any other explanation, not believing I could be infected. No one wants to believe it.

If I could have handled this differently, I would have believed the signs faster, and got a test sooner. I would have asked for a second test the following day.

This was nothing like any cold, flu, or allergy I’ve ever had. My nose was clear as a bell. Whatever it was, was entirely in my lungs. To coin a phrase from Oprah: ‘if someone shows you who they are, believe them’.

Sixteen days later, I am, hopefully reaching the other side of an illness that built in steady, breathless waves, then reached a crescendo that had me considering calling an ambulance. I guess this is what they consider a ‘mild’ case.

For the majority of the first 10 days I was going to bed unusually early most nights. I sat on my work stool for a few hours of work each day, moving as little as possible. It helped my breathing to be upright. I was super tired most days, and slept a lot.

During the weekend of the 9th of May I laid, propped up on pillows on my bed, in short pj bottoms and a t shirt with the window wide open, and cool air blowing in - thanking the heavens for the cold weather and wind. It’s how I slept too.

I’m writing this down for a couple of reasons:

False negatives seem to be a thing …

In my case I had a throat swab. The nurse made two attempts at taking it, because I was gagging each time. I had also gargled with mouthwash containing alcohol ( without thinking ) just 15-20 miuntes prior to my test. She told me I was doing well and to relax. It is not a comfortable experience for anyone, and those health workers are incredible. Absolutely incredible. Fearless.

Here are some articles about ‘false negatives’.

If you have multiple Covid 19 symptoms, and test negative - I urge you to consider asking for a second test. Please continue to self isolate.

Research from an Associate Professor of Epidemiology at the Johns Hopkins Bloomberg School of Public Health, and his team

Another article about ‘false negatives’

I imagine there will be those that read this and conclude quickly that my test was negative, therefore I must have been sick with something else. When I learned my result, I was relieved - glad that I had missed the virus. But I was also confused. I went to bed accepting the outcome, and hopeful that whatever was going on had reached an apex already anyway. But it hadn’t, I had my worst night with it that same night, sitting on my bed breathless and crying at 4am, on a Monday morning, wondering whether to call an ambulance.

As I reflect back on my timeline, I am pretty sure my sympoms align accurately with Covid-19.

My doctor didn’t call back when I had called them a few days in. I don’t really blame them. I wouldn’t want to be near anyone infected with it. In Ottawa, only health workers were being routinely tested. I had been in contact with almost no one! Just out shopping for groceries once a week. I’ve also been taking 5-10km runs along the river a couple of times a week. However I live in a condo building downtown were there are 200 units, and we’ve heard of cases already in the building. I also live on a floor where two doctors live.

Whatever I am recovering from is taking time. I am a long distance runner, and normally run around 100km a month on average. I haven’t run in over two weeks now. Just emptying the tumble drier end folding laundry leaves me breathless at the moment. Since it is more than 14 days since my first symptoms, I have been going for some very early morning, empty city walks, and need to walk slowly. I get breathless climbing steps, yet it is wonderfully much better than a week ago, and improving day by day.

After self isolating for 14 days, I am continuing to be very socially distant, I am continuing to practice good hygiene. But I am hopeful that an antibody test will prove to me that this was indeed Covid-19. It would seem very remarkable for it to be something else given the symptoms and progression, and the period of time we’re all in.