« Thinking More About Brazil My Csc Assignment »
Thoughts About Manchester

Manchester is making the news this week, because a suicide bomber killed 22 people exiting a concert in the city. He injured dozens more.

This week’s news has me thinking back to my student days in Manchester. It was the city that taught me some sense of ‘normality’ after growing up in the conflict of N. Ireland. So, the news is triggering many emotions for me. 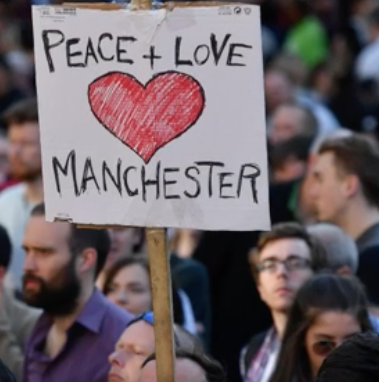 Manchester turned me into a software engineer. It gave me a career.

The first day I walked around the city centre, it must have been obvious I was lost. I didn’t need to ask someone for directions, though. They stopped to ask me where I needed to go. That’s how I remember most people being there. Friendly, down to earth, and proud of their city.

Music is part of the fabric of Manchester. Bands like The Smiths, Joy Division, New Order, Happy Mondays, Inspiral Carpets drew me to there. The music of Oasis and The Verve cemented the sound of the city for me. I still listen to all of these bands. Even though I only lived there for four years, the music still connects me.

I still cheer for Manchester City football club. I fell for them by watching the Saturday night highlights of their games, projected by the students union disco, to the soundtrack of Madchester. I was in the terraces of the old Maine Road ground for a few games. I followed City through their clumsy ups and downs to becoming one of the best teams in Europe these days. I saw them play this year in Monaco.

I learned to love Indian food on the Curry Mile, sometimes after a night out dancing at the Ritz or Hacienda.

At university, I learned to row on the River Irwell. I remember browsing the racks at Afflecks Palace, walked around fancy stores in Deansgate and pretty Royal Exchange. Taking the frist trams when they came back to the city. Some of the memories I have from back then.

Tonight I’m driving four teenagers to a concert in Montreal. I’m juggling memories of happy times in Manchester, troubled times in Belfast, peaceful times in Ottawa. I feel so sorry for the families who lost their children to the bomb at the Manchester Arena this week. I feel especially responsible for the four young lives in my care this evening. Manchester feels a little more real to me because of it.

I’ve talked to my 16 year old son about the concert tonight. He wants life to be normal, to not let terrorism stop him from hearing live music. I agree with him.

I’ll still be relieved when we get back home.